Botulinum toxin (BTX) injection is being increasingly used ‘off label’ in the management of chronic pain. Data support the hypothesis of a direct analgesic effect of BTX, different to that exerted on muscle. Although the pain-reducing effect of BTX is mainly due to its ability to block acetylcholine release at the synapse, other effects on the nervous system are also thought to be involved. BTX affects cholinergic transmission in both the somatic and the autonomic nervous systems. Proposed mechanisms of action of BTX for pain relief of trigger points, muscular spasms, fibromyalgia and myofascial pain include direct action on muscle and indirect effects via action at the neuromuscular junction. Invitro and invivo data have shown that BTX has specific antinociceptive activity relating to its effects on inflammation, axonal transport, ganglion inhibition, and spinal and suprasegmental level inhibition. Our review of the mechanisms of action, efficacy, administration techniques and therapeutic dosage of BTX for the management of chronic pain in a variety of conditions shows that although muscular tone and movement disorders remain the most important therapeutic applications for BTX, research suggests that BTX can also provide benefits related to effects on cholinergic control of the vascular system, autonomic function, and cholinergic control of nociceptive and antinociceptive systems. Furthermore, it appears that BTX may influence the peripheral and central nervous systems. The therapeutic potential of BTX depends mainly on the ability to deliver the toxin to the target structures, cholinergic or otherwise. Evidence suggests that BTX can be administered at standard dosages in pain disorders, where the objective is alteration of muscle tone. For conditions requiring an analgesic effect, the optimal therapeutic dosage of BTX remains to be defined.

Botulinum toxin (BTx) is an important therapeutic agent with widespread applications in neurological and non-neurological disease. One of the most potent neurotoxins known, BTx derives from the Latin word “botulus” for sausage referring to poisoning from badly prepared meat in the early nineteenth century. BTx is a protein produced by Clostridium botulinum and is comprised of a heavy and light chain linked by a disulfide bond. When activated, it targets peripheral cholinergic systems and prevents the release of acetylcholine. The heavy chain mediates binding to presynaptic cholinergic nerve terminals and internalization of the toxin into the cell. The light chain is a zinc-endopeptidase responsible for its toxic effects and cleaves specific proteins needed for synaptic transmission.

BTx injections have made it possible to control some neurologic conditions that used to require systemic therapy, and to avoid long-term consequences of muscle spasms and involuntary movements. Clinical trials have shown that BTx safely and effectively resolves excessive muscle contraction in dystonia (a condition characterized by sustained twisting and posturing movements which are usually directional in nature), hemifacial spasm and other hyperkinetic disorders, spasticity from stroke, cerebral palsy, brain trauma, or multiple sclerosis, and excessive sweating in autonomic disorders.BTx is a good therapeutic option that lasts for several months, is temporary and self-limited, and has few side effects. Side effects mainly consist of unwanted weakness in the injected muscles or spread into adjacent muscles. This is particularly troublesome in eyelid injections where droopiness may occur, and bilateral neck injections where trouble swallowing may occur. Excess weakness can be avoided by using low BTx doses and EMG-guided injections. EMG guidance into selected muscles is helpful for accurate muscle localization, particularly for limb conditions such as writer’s cramp. Systemic side effects, such as a transient flu-like syndrome, are very rare. Long term studies have shown that BTx continues to be effective and is safe after repeated use over many years. 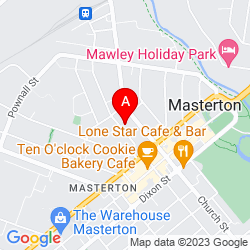 We are located at
50 Perry Street in
Masterton, New Zealand

Book your appointment online
*On call dentist, can be found in the Times Age or by calling Masterton Hospital